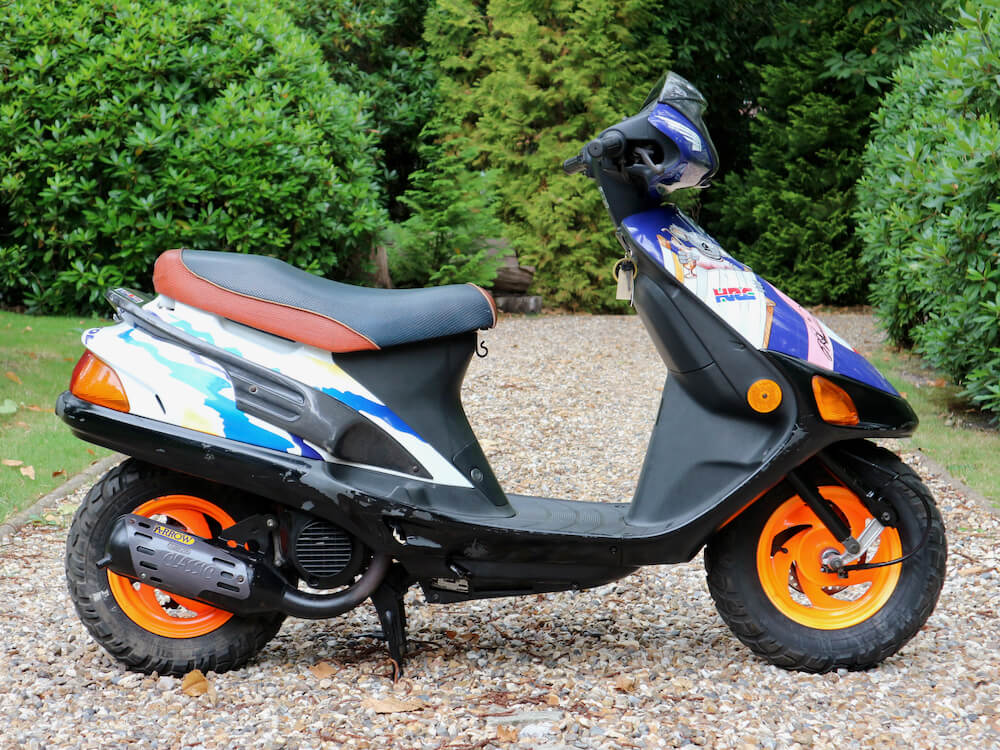 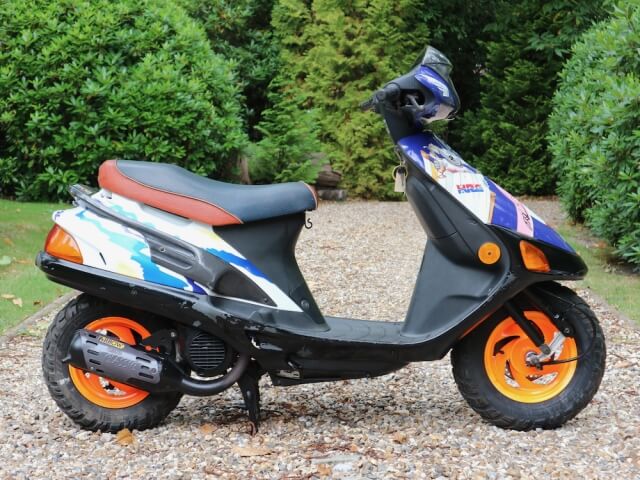 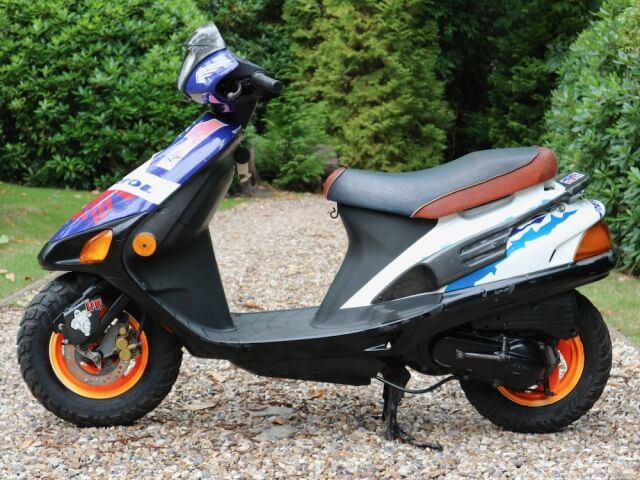 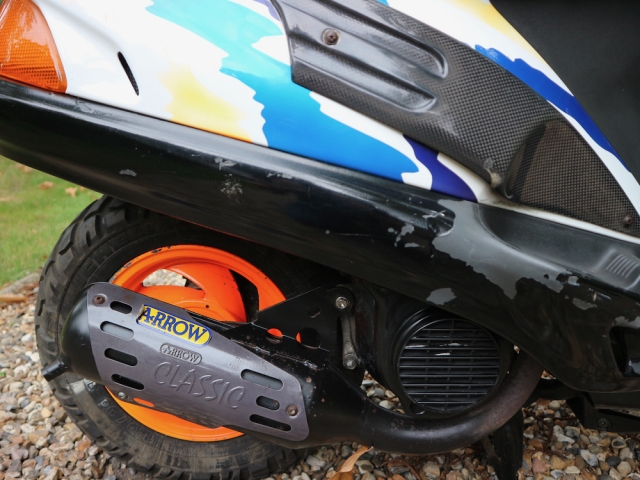 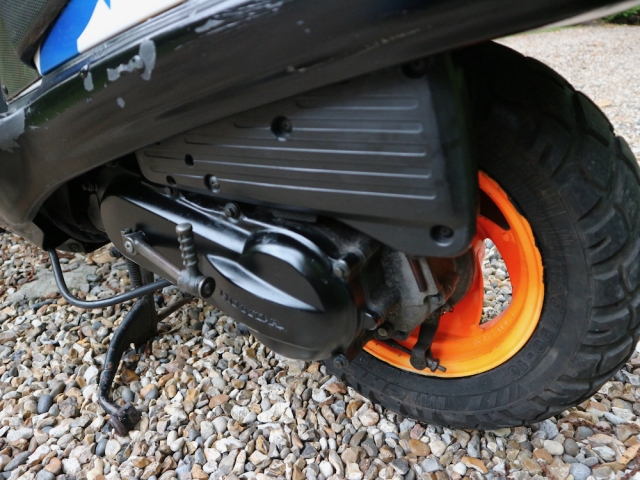 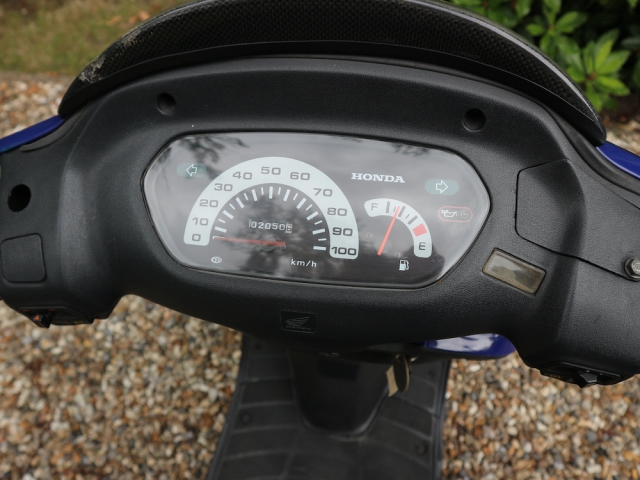 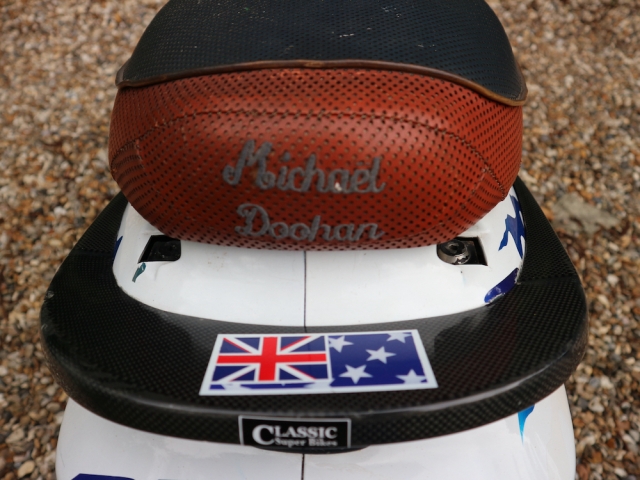 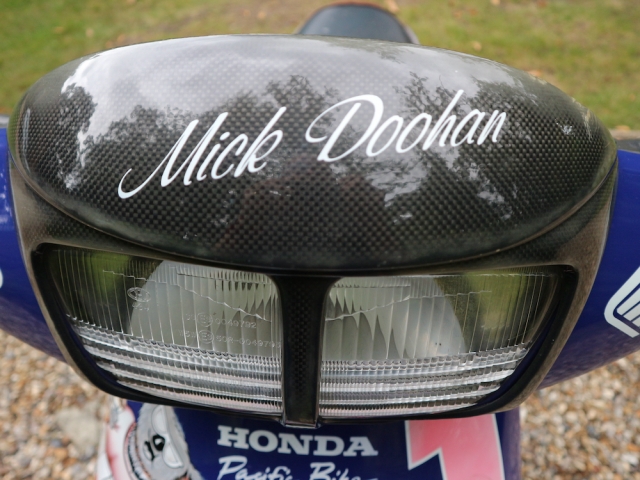 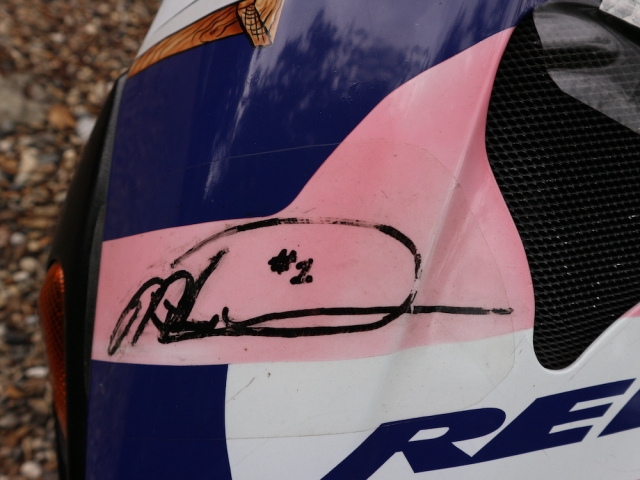 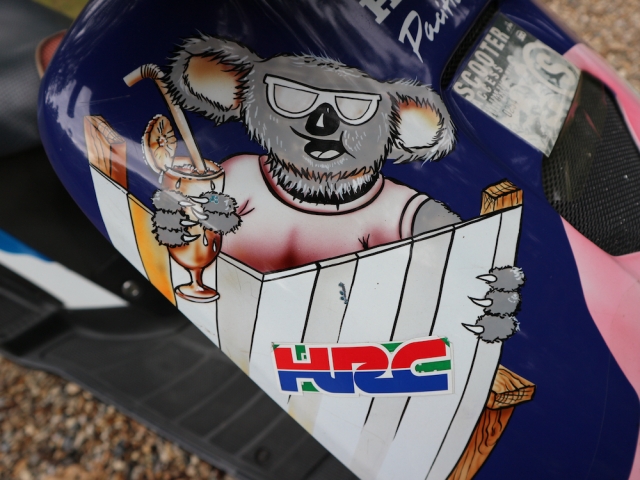 The complete package and a wonderfull addition to any serious collection of famous racing machines. The bike is adorned with special Mick Doohan parts and stickers; carbon handlebar fairing bearing his name, special carbon stying wings on the rear fairing, bespoke leather seat cover embroidered with his name, FIM 500GP scooter pass, custom paintwork on the front fairing and teh iconic Doohan design all over the bodywork plus sponsors’ stickers and period additions everywhere. The word from the last owner was that it was HRC “breathed on” but we can’t confirm this. It is fitted with a performance Arrow exhaust system and the clutch does let in at higher revs than I would expect so maybe it has had some mild tuning. It’s been unused for years and recently recommissioned in our very own Classic Bike Workshop, so it starts on the button now and sounds crisp and clean. Lots of documents including a framed picture of Mick with the bike when it was auctioned for charity many years ago, presumably after he retired although he does look very young in the picture. His name is in the service book from new and there is a collection of documentation which amounts a unique record of this unique machine’s irrefutable provenance. Hard to value but we will consider offers above £5,000 and £10,000 buys it now. It’s not a scooter, it’s the biggest, fastest, rarest most desireable and iconic example of Motorycycling Grand Prix memorabilia you can think of!

Thanks once again for getting the bike ready for sale, I’m please that we closed the sale and your workshop has again presented a bike to market that is inline with CSB’s reputation as a quality and trusted trade

Just to let you know that the Le Mans arrived safely. Very pleased with the way she looks and especially the way she rides. I had a Mk1 over 40 years ago. Was always one of my all time favourite bikes. Many thanks to you and I hope we

Thanks for the excellent service, the Norton was exactly as you described, so refreshing to deal with a true enthusiast. I will be coming back for more!

Just to let you know bike arrived safely. Your courier gave excellent service. I would have liked to have had the time to have offered him a cuppa but had to get back to work, and covid restrictions. Thank you for your time and supplying an excellent bike. I

Dear Chris, You are an absolute star. Many thanks for your help.

Hi Chris, just wanted to let you know I've been out for a couple of rides now on the TRX, Wow! What a lovely bike, very rewarding to ride loves being revved. Think it's a keeper.

The bike came today. It looks nice and drives OK. It was a pleasure doing business with you. So maybe again some other time?

Chris, parcel arrived . Many thanks for the seat and book. Really happy with bike and thanks for all your help. Wish you all the best for the future

Thank you very much Chris. I have just received a notice from DVLA confirming that I am the new keeper, after 9 years... You saved me from a potentially very annoying situation into which I put myself through sheer negligence. It reminds me that I should check

This website uses cookies to improve your experience while you navigate through the website. Out of these, the cookies that are categorized as necessary are stored on your browser as they are essential for the working of basic functionalities of the website. We also use third-party cookies that help us analyze and understand how you use this website. These cookies will be stored in your browser only with your consent. You also have the option to opt-out of these cookies. But opting out of some of these cookies may affect your browsing experience.
Necessary Always Enabled
Necessary cookies are absolutely essential for the website to function properly. This category only includes cookies that ensures basic functionalities and security features of the website. These cookies do not store any personal information.
Non-necessary
Any cookies that may not be particularly necessary for the website to function and is used specifically to collect user personal data via analytics, ads, other embedded contents are termed as non-necessary cookies. It is mandatory to procure user consent prior to running these cookies on your website.
SAVE & ACCEPT